I was browsing through a bookshelf of old film books, looking for inspiration last night, when I happened upon The Horrifc World of Monsters by Dulan Barber, fist published in 1974 by Marshall Cavendish.  It's an old monster A-Z book full of creatures from films and mythology.  I gleaned a few ideas from some of the entries I thought might be useful for future articles.  Then I read the entry for Tolkien's orcs and I realized that anything I took from the book would need to be checked very carefully.  Here's the entry in full:

The late J.R.R. Tolkien's celebrated book, The Lord of the Rings has provided a whole new series of monsters, many of which have found a permanent place in popular contemporary mythology.  One of the most important of these is a dwarfish elf-race known as ORCS who act as the main fighting force of the Dark Lord, Sauron.

There are two different kinds of Orcs.  The most numerous are small, dirty creatures with disproportionately long arms.  For the most part they are bow-legged and squint-eyed, while their teeth are like fangs.  They wear leather clothing and iron shod shoes which are said to bespoil and blacken everything over which they pass.  They communicate in a strange, hissing language and are very argumentative and quarrelsome, sometimes even eating each other when holed up in the black caves of Mordor which is their home.

Although these Orcs serve the Lord Sauron and fight his battles in great hordes, they are essentially cowardly and, when not doing battle, are very badly treated.  They are often fed to the monster Shelob and the air-steeds of the Ringwraiths and they are frequently beaten.  These Orcs have an abiding hatred of the sunlight which they will avoid at all costs.

The second species of Orcs are not afraid of the sunlight and were fashoined by the Wizard Saruman.  They are larger, better fed and braver than the other Orcs.  They are employed in Saruman's battle against Sauron but, despite their man-size and appearance and their bravery they are doomed to be outnumbered by the dwarfish Orcs.

The book may have got this entry dreadfully wrong, but after I'd stopped laughing, I began to think that it might make quite a good setting for a campaign.  Two warring orc tribes who dominate the land, with remnants of humanity scattered to remote locations.  Adventurers could venture out to loot orc dungeons, or retrieve lost artefacts.  I am already playing in a Stonehell campaign (see Inheritance in Oubliette Issues 1 and 2) set in a post-plague world, so I know this sort of set up works a treat. 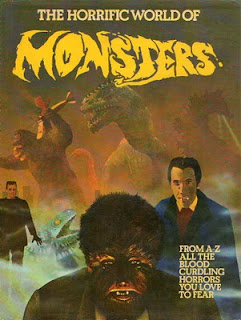