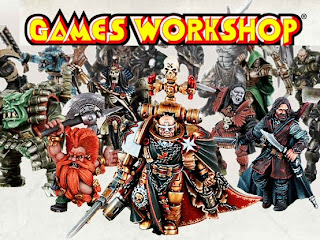 Just to follow up on the GW post earlier this month:  They've now posted the results that the earlier profit warning foreshadowed.  These results are in line with the earlier statement, sales in the six months to 28th November down 4% at £60 million.  Profits for the same period were down 15% on the previous year at £6.7m.

Mark Wells, Chief Executive, said: "We made some changes to our staffing in stores, so in the school summer holidays, when our stores are busiest, we had inexperienced managers and we were a bit flat-footed.  The focus remains on investing in openings and improving retail volume. Cash generation remains strong."

GW shares are down about 1% this morning, having already fallen around 20% on the back of the profit warning in early January.  Next time I'm in town, I might venture into a GW store to see what's what.  Failing that, I'll report back when they issue their full year results.  I haven't changed my view that they may be in for a rough ride.  Even though they are not directly comparable, Wizards of the Coast's decision to drop the D&D miniatures line also points to a shift in the market.
Posted by Peter Regan at 12:12 No comments: 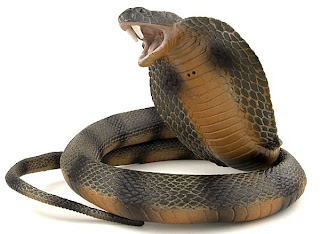 Following the nasty, surprise encounter with four giant crab spiders at the end of the last session, the party returns once more to Stonehell's first level, a little weaker, but maybe a little wiser. The reconstituted group now comprises:


When we met the spiders, we were planning on trying the wheel of fortune and revisiting a glyph we'd found in an earlier session. So having had our fill of the wheel last time, we make for the area we marked as having a glyph. We take the safest route possible and arrive without incident. After looking at the glyph for a while and asking various questions about it one of the fighters reaches forward and touches it. He disappears instantly, finding himself in a 10' x 20' room with no obvious exits. However, the room does have another glyph in it making the room essentially a secret safe room. He touches the glyph and is instantly transported back to the party. The entire group then use the glyph to gain access and search the room. There's a fair amount of rubble to look through, but the searching pays off when an old spell book is found. The wizard studies the book and identifies nine new spells that he can add to his own book. This is quite an impressive find, and the room itself may prove very useful as a place to recover in safety.


Building in confidence once more, the party head towards a new quadrant of the level and, after mapping a few corridors, we find several possible directions to explore but settle on a door with a small opening in it. Nearby, there is a sign saying 'Open Sore Tribe Keep Out!' There's an obvious light source in the room, so we decide to play a little knock and run with the occupants. The party cover the lantern and stand 20 feet back with crossbows at the ready. A stone thrown at the door has the desired effect, bringing out four orcs to investigate. One of the orcs drops instantly from a bolt to the chest and the other three run off down the corridor. We quickly check the room, but don't find anything of interest – clearly just a guard room. Aware that the survivors may have called for back-up, we throw a lit torch some 40 feet down the corridor to the corner they fled to. We shutter the lantern again and step back out into the corridor. Two orc archers step out from the corner and we give them a volley forcing them to retreat before they can return fire.


The orcs don't come back, but we anxiously keep a look-out, expecting an ambush from any direction. We slowly round the corner and the corridor opens out slightly. There is a door to the left and another in front. We try the door to the left and, upon opening it, find ourselves faced with what seems like the whole tribe of orcs – 19 of them in all. The fighter and dwarf take a couple of them out in the doorway and a bunch of the remainder fall to the ground courtesy of sleep spell. The orcs still outnumber us, so we retreat and they close the door as soon as we leave. Next, we make for our newly discovered safe room to rest and revise some spells. We've only taken a couple of minor hits, but we deem it wise to only tackle the 17+ remaining orcs if we are at full strength.


Some eight hours later, with full hit points and a couple of sleep spells ready to go, we carefully edge back towards the orcs. They are on full alert. As we approach the room of the last encounter we find seven of them in the wider section of the corridor. With little fuss all seven drop to the floor either dead or asleep. In the next round, 10 more orcs emerge from the room and charge us. The front runners manage a single attack before the second sleep spell takes them out. We're left with just four opponents and begin to hack them down. A single orc manages to escape into the room and we see him disappear through another door, which slams shut behind him. The sleeping orcs are quickly despatched and we search the bodies. From the rank and file corpses, we harvest a total of 140sp. Two of the bigger orcs each have gold necklaces, and an even bigger orc (their chief, we assume) has a platinum circlet.


Our attention now turns to the door through which the last orc made his escape. We approach it and have a listen. It's immediately clear to us that the room is home to the tribe's females and young. We're not butchers, and a negotiation ensues through the door. We essentially offer to spare them all if they open the door and allow us to search the room unhindered. They really don't have a choice and the door opens to reveal a single orc male and a dozen or so terrified females and young. The search quickly turns up a manky looking owlbear pelt and an iron chest. One of the females has a sapphire studded nose ring which she hands over pronto. We nominate the orc male to open the chest for us. Initially, he refuses. The points of three long swords pressing into his back quickly change his mind. He opens the chest and is promptly slain by the spitting cobra residing within. We get rid of the snake and orc corpse, drag the chest out of the room and bid the orc ladies, “good day”. It's a heavy chest, and on opening it, we can see why. It contains 2,000sp, 5,000gp and three gems. This amounts to a record haul for our party in a single visit to Stonehell.
Once safely back at home we hand in the most of the treasure to our community's elders, and walk away with almost 10,000xp (over 1,600 per character). All the first and second level characters level up, and, in the space of one short session, the party emerges even stronger than before the disastrous events of the previous session. Hackett, the community's elderly, and completely mad wizard is delighted with the owlbear pelt and takes to snuggling it and prancing around with it making hooting noises. It's rotting and worthless, he's welcome to it.
Posted by Peter Regan at 15:00 No comments:

Make Your Own Miniatures with a 3D Printer 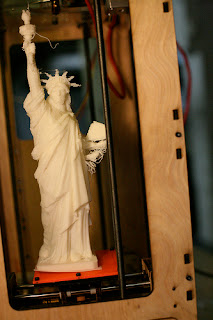 I remember seeing a technology news piece a couple of years ago which demonstrated how a 3D printer could produce a complex object from a computer model.  It was produced in a printer that could lay down hundreds of layers of hot plastic on top of each other.  At the time the cost of such a device was tens of thousands of dollars, keeping it very much in the commercial sector for the use of car designers and the like.  I was therefore somewhat surprised to open a newspaper yesterday and see such a machine.  The MakerBot, is now available in kit form for just $1,200.  I would estimate that the rate at which the technology is developing will see a $500 consumer friendly version of these printers by the end of 2012.  The current model would do a good job of printing out 3D dungeons, and an improved version might even be able to turn out detailed miniatures.  I'm sure that the consumer electronics giants will be taking a look at the market, but for the moment, one of the nice things about the Makerbot is that it's open source. 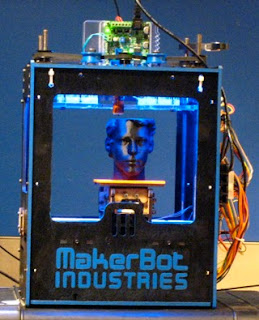 The Beginning of the End for Games Workshop?

Games Workshop have today issued a profit warning on the back of declining sales for the 6 months to 28th November.  In The Guardian an analyst revised his profit forecast from £17m for the year, down to £12m.  This analyst maintains that there is still long term growth to be had from GW, but I'm not so sure.  The city has responded by knocking 13% off the GW share price.

Personally, I think that unless GW can make substantial inroads into the computer and video game markets, they may be gone in as little as 5 years.  GW have pretty much reduced their range to games that require and entice players to get into the hobby of collecting and painting toy soldiers.  If they were just a manufacturer/distributor of their products, they might have been okay, as careful management would have allowed the business to expand and contract.  However, having a large chain of retail shops that sell nothing but GW product leaves them vulnerable to even small shifts in the market.  Other toy and games shops will have done exceptionally well this Christmas selling traditional board games, lego games and console/PC games, but GW has nothing to offer those customers.

Twenty five years ago, Games Workshop was a specialist games shop which offered a great range of RPGs and board games with miniatures and the then still very new Warhammer rules.  I'm not bitter about the commercial direction they took and I certainly don't want to see the company fail and cost the UK hundreds more jobs.  Nontheless, I can't help thinking: if the empire that is GW plc had evolved differently, or had been split into separate divisions, I might still have reason to go into my local GW store as a gaming customer.
Posted by Peter Regan at 16:14 9 comments: