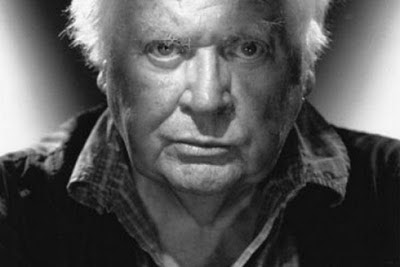 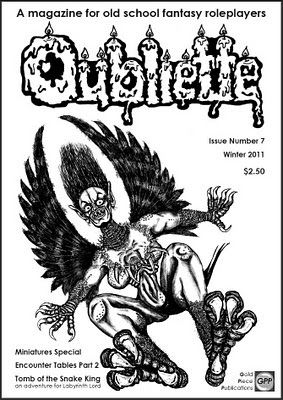 Issue 7 of Oubliette is due for release later this week.

Following the terrific response we had to the Issue 5 and 6 giveaways, Issue 7 will also be available for a limited period as a free download from rpgnow.com.

Here's an advance look at the contents:
Posted by Peter Regan at 10:02 3 comments:

I had an enjoyable day at Dragonmeet in London yesterday.  It was my first visit to the show and it was great to see so many people in one place playing games.

There was a good trade hall with plenty of tempting stuff,  although not as much variety as there was the UK Expo in Birmingham.  My wife bought my Christmas present from one of the stands, but as it's a surprise, I'll have to wait to find out what it is.  On the OSR front, Jim from LotFP had a stand and seemed to have a good flow of customers.  There was also a Fighting Fantasy stand where Ian Livingston gravitated for a while (he was also one of the seminar guests) to sign books for visitors.

Even with those two stands, the OSR still seemed under-represented. No retroclones were on sale, and even Leisure Games did not seem to have their usual selection of OSR modules and supplements on offer.

I gave out just over 100 copies of the mini Oubliette (Issue 6.5) so hopefully, when Issue 7 goes on download later this week, we'll have a few new readers. 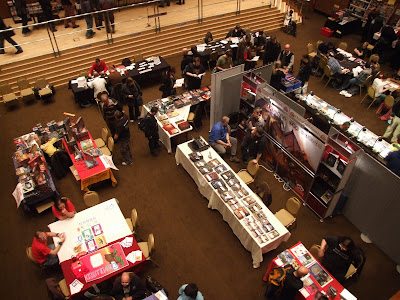 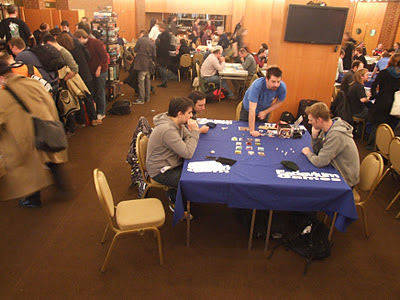 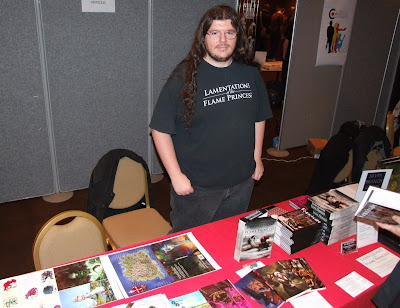 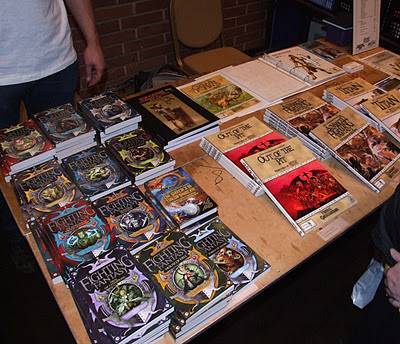 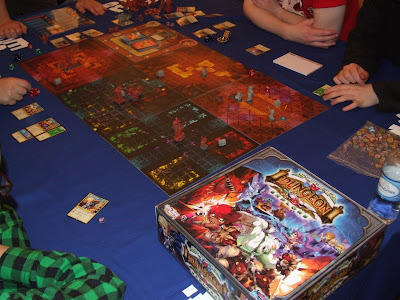 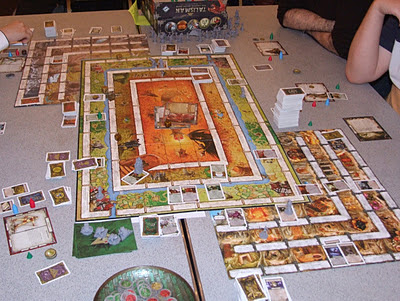 TMI (Too Much Information) 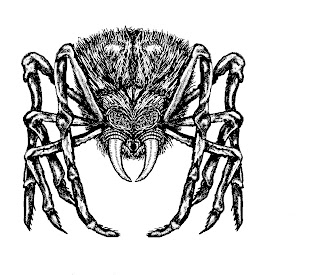 My immune system has been rather lackadaisical in its approach to keeping me healthy. I have been ill the last week. On Monday, I insisted on working and ended up snotting clear mucas on two ink drawings (both now on sale for exhorbitant prices, complete with artist's DNA(not really)). I'm in catch up mode now. For every mag we've done, I've always been ahead of the game. I hate being behind.

Tomorrow, Pete and I are going to Dragonmeet in London, which I'm very excited about. Of course, I shall be taking my sketch pad and finishing off the Sithakk illustrations in the evening. We're taking a camera, so stand by for some bloggage.

Proof reading continues apace, and we're confident that next week, Oubliette Issue 7 will be ready for release. Hurrah.
Posted by The Marg at 10:18 6 comments:

A Tale of Two Characters

I took the What Kind of D&D Character Would You Be? test yesterday.  Here's the resulting character, which I though was a fair reflection of me:

Ability Scores:
Strength- 14
Dexterity- 12
Constitution- 12
Intelligence- 14
Wisdom- 14
Charisma- 15
Alignment:
True Neutral- A true neutral character does what seems to be a good idea. He doesn't feel strongly one way or the other when it comes to good vs. evil or law vs. chaos. Most true neutral characters exhibit a lack of conviction or bias rather than a commitment to neutrality. Such a character thinks of good as better than evil after all, he would rather have good neighbors and rulers than evil ones. Still, he's not personally committed to upholding good in any abstract or universal way. Some true neutral characters, on the other hand, commit themselves philosophically to neutrality. They see good, evil, law, and chaos as prejudices and dangerous extremes. They advocate the middle way of neutrality as the best, most balanced road in the long run. True neutral is the best alignment you can be because it means you act naturally, without prejudice or compulsion. However, true neutral can be a dangerous alignment when it represents apathy, indifference, and a lack of conviction.

Class:
Rangers- Rangers are skilled stalkers and hunters who make their home in the woods. Their martial skill is nearly the equal of the fighter, but they lack the latter's dedication to the craft of fighting. Instead, the ranger focuses his skills and training on a specific enemy a type of creature he bears a vengeful grudge against and hunts above all others. Rangers often accept the role of protector, aiding those who live in or travel through the woods. His skills allow him to move quietly and stick to the shadows, especially in natural settings, and he also has special knowledge of certain types of creatures. Finally, an experienced ranger has such a tie to nature that he can actually draw on natural power to cast divine spells, much as a druid does, and like a druid he is often accompanied by animal companions. A ranger's Wisdom score should be high, as this determines the maximum spell level that he can cast.
A bit dull though, so I  re-did the test.  This time I answered the questions to reflect the type of character I like to play and how I have them behave in a game:

Ability Scores:
Strength- 17
Dexterity- 18
Constitution- 16
Intelligence- 14
Wisdom- 14
Charisma- 12
Alignment:
Chaotic Evil- A chaotic evil character does whatever his greed, hatred, and lust for destruction drive him to do. He is hot-tempered, vicious, arbitrarily violent, and unpredictable. If he is simply out for whatever he can get, he is ruthless and brutal. If he is committed to the spread of evil and chaos, he is even worse. Thankfully, his plans are haphazard, and any groups he joins or forms are poorly organized. Typically, chaotic evil people can be made to work together only by force, and their leader lasts only as long as he can thwart attempts to topple or assassinate him. Chaotic evil is sometimes called demonic because demons are the epitome of chaotic evil. Chaotic evil is the best alignment you can be because combines self-interest and pure freedom. However, chaotic evil can be a dangerous alignment because it represents the destruction not only of beauty and life but also of the order on which beauty and life depend.

Primary Class:
Sorcerers- Sorcerers are arcane spellcasters who manipulate magic energy with imagination and talent rather than studious discipline. They have no books, no mentors, no theories just raw power that they direct at will. Sorcerers know fewer spells than wizards do and acquire them more slowly, but they can cast individual spells more often and have no need to prepare their incantations ahead of time. Also unlike wizards, sorcerers cannot specialize in a school of magic. Since sorcerers gain their powers without undergoing the years of rigorous study that wizards go through, they have more time to learn fighting skills and are proficient with simple weapons. Charisma is very important for sorcerers; the higher their value in this ability, the higher the spell level they can cast.

Secondary Class:
Rogues- Rogues have little in common with each other. While some - maybe even the majority - are stealthy thieves, many serve as scouts, spies, investigators, diplomats, and simple thugs. Rogues are versatile, adaptable, and skilled at getting what others don't want them to get. While not equal to a fighter in combat, a rogue knows how to hit where it hurts, and a sneak attack can dish out a lot of damage. Rogues also seem to have a sixth sense when it comes to avoiding danger. Experienced rogues develop nearly magical powers and skills as they master the arts of stealth, evasion, and sneak attacks. In addition, while not capable of casting spells on their own, a rogue can sometimes 'fake it' well enough to cast spells from scrolls, activate wands, and use just about any other magic item.
Now that's more like it!

Oubliette Issue 7 will be out in the next couple of weeks and, as usual, I'll put up the contents page about a week before the issue is released.

In the meantime, I've created a special mini promotional issue of Oubliette (Issue 6.5) to use for promotional purposes. The issue is A6 sized, and is printed on a double-sided A3 sheet, and then cut and folded like a PocketMod. I'll be sending copies to UK games stores, to promote the free download of Issue 7. I'm also sending a batch of them to Otherworld Miniatures who will be including them with orders in the run-up to Christmas.

The content inside is mostly taken from the forthcoming issue, so our regular readers won't be missing anything if they don't get one (apart from the Succubus on the title page). However, if you simply must have one in order to complete your Oubliette collection, then you may order a copy using the paypal button below.

Nearly all of the purchase price goes to the Royal Mail and Paypal, but there's no easy way around that. If anyone wants to buy several copies at once, send me an email and I'll see what I can do. Also, if you are in the UK, I've still got a handful of the Oubliette Issues 1-4 Compilation available for £9.50 including P&P (which should work out cheaper and faster than ordering through Lulu), and I'll throw in a couple of the mini issues as a bonus. 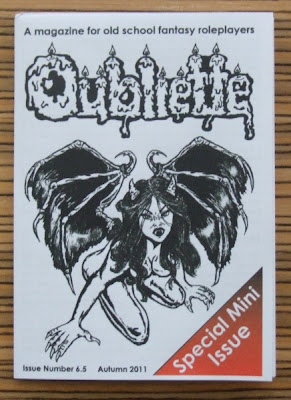 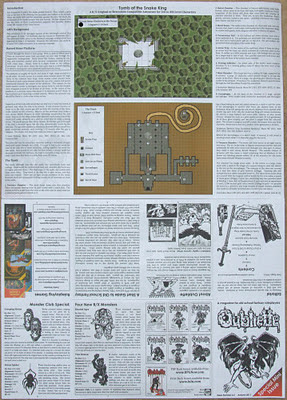 It's official: I am an idiot 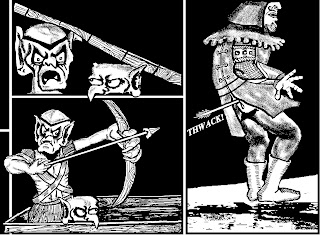 "Why can't I work faster?" I asked Pete during a recent phase of self-hatred.

(I'm finishing the Goblin cartoon "Goblin Quest" at the moment, and it feels like the slowest work I've ever done.)

"Because you're doing twice as much as usual, you idiot," came Pete's reply. (He didn't even glance up from the Monster Club page he was sorting out on his computer.)

The main Heroica set Castle Fortaan (#3860) is on offer at both Amazon.co.uk and Amazon.com

If you were thinking of buying a set pre-Christmas, now may be as good a time as any. 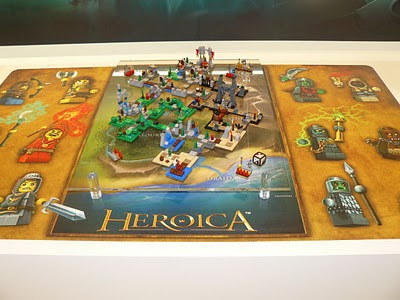 I recently received review samples of two of the smaller sets from Lego, and I have been playtesting them for a review which will appear in the next issue of Oubliette.  Both of the games I have played have been great fun, and my five-year-old daughter is now routinely picking up the box sets and demanding a game.  It is a fait accompli that she will find the other two sets in the range under the Christmas tree this year, and I am looking forward to playing with all four sets linked together, even if the likelihood is high that she'll thrash me.
Posted by Peter Regan at 09:28 1 comment: