Here's my entry for the latest round of Inkwell Ideas #GeomorphMaContest. 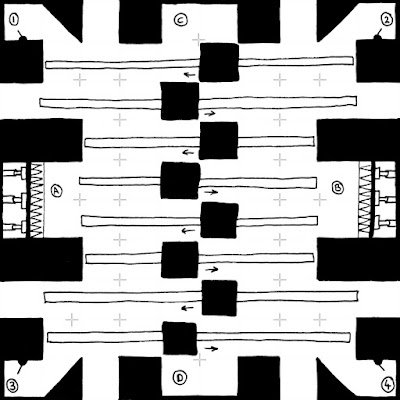 It's called Block Runner. Here's the blurb for it:

All the entrances of the geomorph open into a large chamber. Running along the length of the middle of the chamber are 8 giant blocks. In the floor, beneath each one, are channels that run the entire width of the room. In each corner, there is an alcove. Inside each alcove is a large metal lever. As soon as someone walks 3 squares into the chamber from any direction each block begins moving rapidly along its channel. The blocks start moving in the direction shown by the arrows, and then change direction when they reach the end of their channels. The blocks move 1d6 per round. Any character hit by a block will take a lot of damage, but you may allow a saving throw or similar and let them dodge a block that crosses their path.

There are alcoves in the middle of the perimeter walls that offer some respite from the sliding blocks. However, two of the levers in the corner alcoves have the potential to make them just as deadly as the blocks.

If the levers are pulled they have the following effects:

The trap resets 10 minutes after all movement (other than the blocks) in the room has ceased.
Posted by Peter Regan at 20:50 No comments:

+Kristian Richards of Crooked Staff Publishing kindly sent me an advance copy of his new zine 'Neath the Shadow last week. It's contents is intended for use with Kristian's The Age of Shadow RPG. However, almost all of it would be very easy to convert for use with other games. 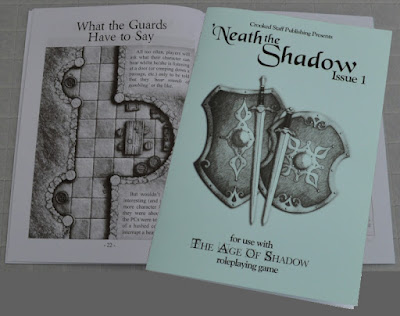 The first thing that struck me is that this is very polished looking first issue. My advance copy is printed in black and white, but the PDF version on RPGNow is a full colour version. Anyone familiar with Kristian's other work will be well aware of his talent for producing maps, and you get four of them in this issue. The zine runs to 24 A5 pages plus the cover and contains the following:


My favourite article is the last one about Guards. It includes a map for a guard post that could be dropped into almost any dungeon. There's a simple table to determine how alert the guards, but the best part is the collection of six sample conversations that a party might overhear if they approach the guard post unobserved.

You can get the PDF of 'Neath the Shadows from RPGNow here:
http://www.rpgnow.com/product/151340/Neath-the-Shadow-1-zine

and in print from Lulu here:
http://www.lulu.com/shop/kristian-richards/neath-the-shadow-1/paperback/product-22217631.html

I got a great response to my post on Sunday about my dream of republishing The Lichway. Since then, I've gone through all the comments on the Blog post, Google+ and also replied to people that have sent emails. All of them have been extremely helpful in working out how best to proceed.

Today I've done some more ground work, and I will post another update as soon as I have something to report. If in the meantime anyone has any further leads or contacts, please feel free to share them publicly or privately.

To finish I'd like to share this video link of Albie playing D&D that Zhu Bajiee of realmofzhu.blogspot.co.uk sent me. I have seen the footage before but it was great to be reminded of it.

The Cthulhu Book Poster Kickstarter has ended. If you missed it then you can still get either or both of the posters from Squarehex here: http://squarehex.myshopify.com/collections/posters 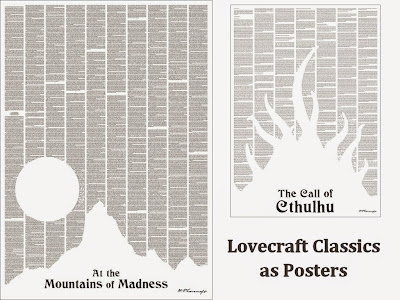 I Wish I Could Publish The Lichway

Every time I think about this classic adventure, I can't help but daydream about how cool it would be to publish it as a standalone B/X module.

I'm not sure who owns the rights. It's possible that they were owned by the author, the late Albie Fiore and became part of his estate. Or they might be owned by Games Workshop/White Dwarf where Albie worked. Either way, if anyone reading this has any ideas about how the rights might be acquired, or permission gained to publish it, I'd love to hear from them.

I'd be very happy to publish it as a free PDF and an at cost print product. It's just something that shouldn't be left in old copies of White Dwarf.

I've finished my second Water Geomorph for the +GeomorphMapContest. It's called The Fishbowl.

"Years ago the Dwarves discovered this natural cavern while mining, and found that it was plentiful with fish. Now the Dwarves are gone, and goblins live in the once splendid Dwarvern Halls. The goblins don't fish in the cave's waters though. Something terrible now lurks under the water. Long, suckered tentacles lie coiled beneath the surface, ready to snatch anything that dares to cross the bridge above. The goblins use the bridge as a test to initiate young warriors. Arrows are fired across the bridge and the goblins dash across to retrieve them to earn their places as warriors of the tribe."

I might do a full write-up of this one too. 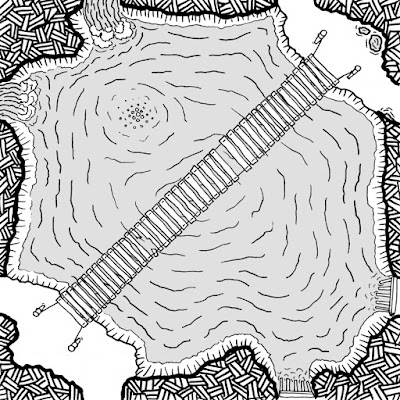 This the second Water Geomorph that I'm working on for the +GeomorphMapContest. The original pencil sketch can be found here.

For this one I actually drew the bridge on a separate sheet, scanned it, and placed it on the main outline. Next I'll print the combined drawing 6up on a sheet and sketch details multiple times. Then I'll scan the best versions of the new elements, clean them up, and drop them in one-by-one. 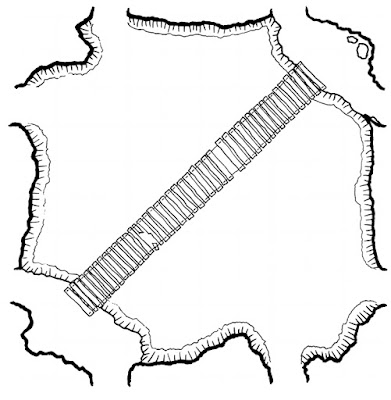 There's just a couple of days left to run for the Cthulhu Book Posters Kickstarter. The campaign has been a huge success. The posters got a paper upgrade very early on in the campaign, but now they will be further enhanced with a matt UV coating. This improves contrast, and give the posters a lovely finish. It also makes them tougher which is a bonus.

Here's a link to the campaign: https://www.kickstarter.com/projects/1730454032/cthulhu-book-posters

Taking photographs of mostly white posters in a glass frame is very tricky, but I've had a go anyway. These photos don't do the actual items justice but I wanted to show something more than just flat images.

Labels: At the Mountains of Madness, book poster, Call of Cthulhu, kickstarter

I've finished the first of my water geomorphs for the +GeomorphMapContest. I posted the pencil sketch of it a couple of days ago here.

I redrew the basic layout in pen the scanned and added flat grey fills. I then drew a collection of items on a separate sheet so it wouldn't matter if I made mistakes. This also allowed me to carefully move objects around until I was happy with their positions on the map.

It features a baker's cellar that houses a large water wheel that drives a stone to grind wheat. I've not decided whether the Baker is aware of the cultists that meet next door, and the secret passageway that connects the two cellars. I'll probably write this up for the next issue of Oubliette. 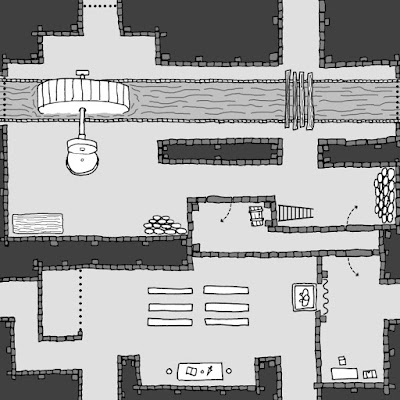 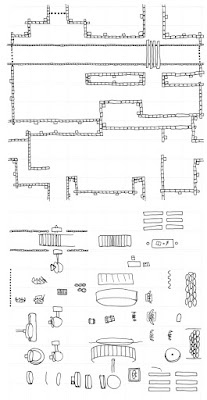 Couple of drafts for the water round of the +GeomorphMapContest Both drawn in the park this afternoon while my Daughter and her friends were playing after school.

The first one features and underground water wheel where a baker grinds flour for bread, completely oblivious to the cultists that meet next door.

The second is a subterranean, water filled cavern with a pretty treacherous rope bridge crossing. I'll do pen versions of these over the next few days. The contest is running until Monday. 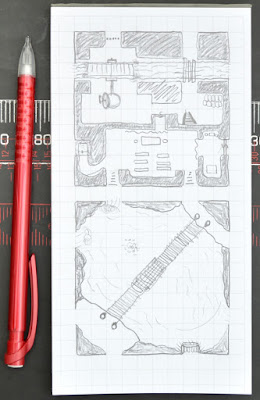 I'm a big fan of the maps that Simon Forster posts regularly on Google+. This morning I got a very pleasant surprise in the form of a postcard from Simon with a very cool hand-drawn map. It would make a very nice little side trek in an adventure. The party make camp for the night in a ruined village, only to be awoken in the night by strange noise coming from the cliffs above... 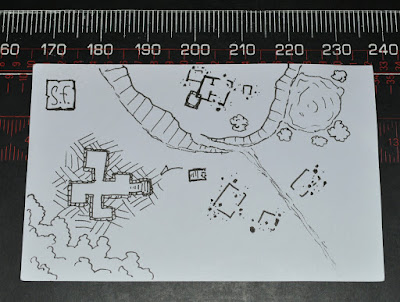 I've drawn one of the previous three Geomorphs again using the new template. It took about twice as long to draw, but I think it was worth the effort. The lines look a lot straighter, yet it still looks hand-drawn.

Here's a scan of the drawing: 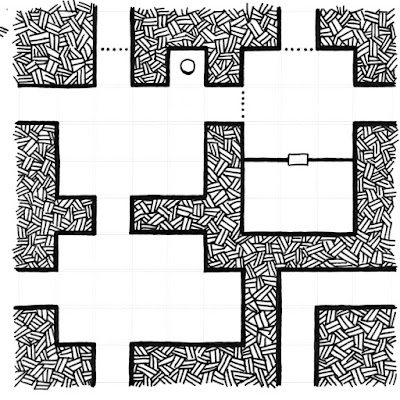 And here it is cleaned up ready for printing. 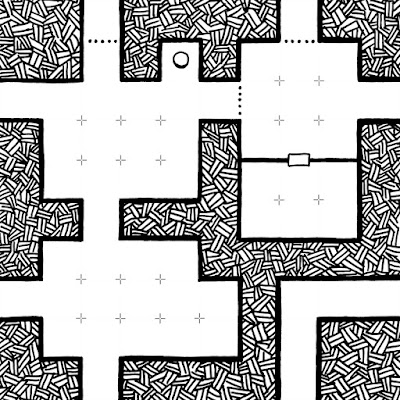 Using arcane knowledge gleaned from the long lost Games Workshop Dungeon Mapping Sheets, I've created a handy geomorph template with a double line grid. I've left the entry/exit points as single lines so they are easy to spot. I'll draw my previous three geomorphs on these and see how they look. 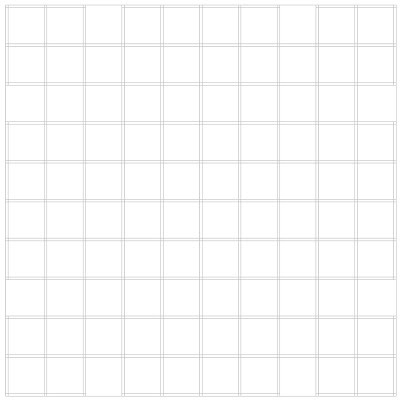 I've decided to redraw all my beermat and other old geomorphs in a uniform style and size. The three pictured below are drawn on 7mm grid paper (cut from one of my larger pads). I'm going to print a couple of alternative grid sizes and draw the same three tiles. I'll then scan them all and see how they print at different sizes.

I'd say there's about a 90% chance that I'll have another geomorph related Kickstarter before the end of the summer. 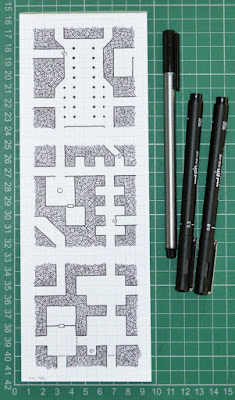 I didn't have time to make a big display for the Geomorphic Beermats at the UK Expo. Since then I've been scribbling a few geomorphs each evening. The end result is the poster below, which contains 48 geomorphs (24 full tiles and 24 edges/corners). I'll be taking this with to shows in future to promote the mats.

The Beermats are all now live again on the Squrehex site ready to order, so if you missed the Kickstarter now's your chance to grab some. 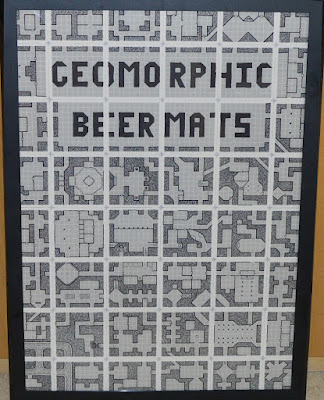 I was very pleased this morning to see my Cthulhu poster project had made it back to the #1 slot on Kicktraq's Art Hot List. The project has been somewhere on the list for most of its run, but it hasn't broken through to the main Hot List. Its jump to #1 on the Art list today seems to be purely down to the fact that the project hit 1000% of its original goal. 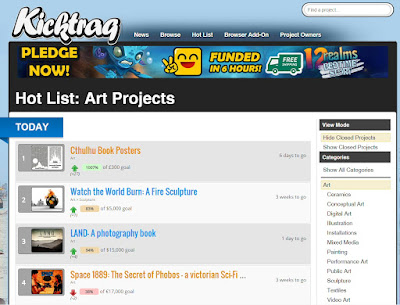 What's got me puzzled is that it hasn't shown up anywhere on the main Hot List. I've had previous projects on the main Hot List and some even got close to the top for brief periods. The current project is outperforming anything I've done before, but doesn't seem to be registering. I then realized that the arcane formula used to calculate the Hot List must have a weighting element for different categories. All my previous projects have been in the Games category, whereas the poster are in Art.

I don't have a problem with it either way, and remain a great fan of Kicktraq regardless. Anyone else noticed any quirks with Kicktraq's math?
Posted by Peter Regan at 10:31 2 comments:

We had a very busy three days in Birmingham last weekend. This year we had a 50% bigger stand than in 2014, but we gave up the corner location we had last year so the extra space only cost about 30% more. I'm delighted to report that it was a worthwhile upgrade as sales were up almost exactly 30% too.

Although about 50% of our takings were from sales of miniatures, we sold lots of OSR books and more paper pads, notebooks and mapping sheets than we have at any show to date. We also sold lots of Cthulhu posters from the test print-run for the Kickstarter.

The stand was so busy that it was the first year that I didn't get a chance to do a quick walk around the show. Lots of previous customers and kickstarter backers stopped by to say chat though, and they all seemed to be really enjoying the show.

Next year the Expo trade halls move to the NEC. I'm a bit wary about that as the gaming component of the show will remain in the hotel some 10 minutes walk away. However, it remains the most important gaming show in the UK so I'm sure we'll be back. 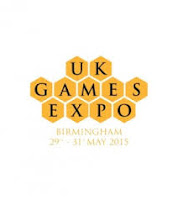