Following on from last week's Lego post here.  I broke down my first creation (a goblin dungeon base) so that I could build an adjoining section.  In this area a group of red-robed cultists reside.  They buy prisoners from the goblins so they have a constant supply of victims for the.... well that will have to wait until the next section which the wide staircase leads to. 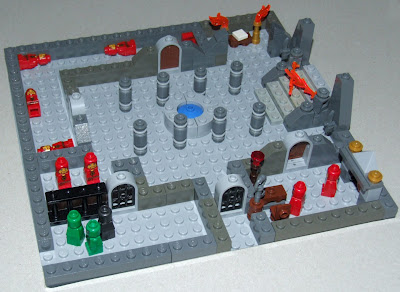 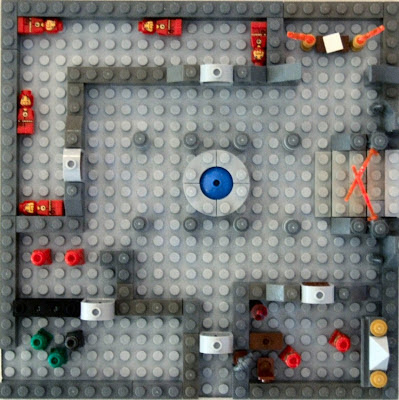 Tenkar posted about map making yesterday and I got thinking about the paper I use for maps.  Nearly all my maps start on squared paper with a pencil.  And nearly all of that paper has 5mm squares.  However, I have a few sheets left in pad with 7.5mm squares and I find that's the perfect grid for my drafts.  I must have bought the pad years ago, and I wish I'd bought a dozen of them as 7.5mm doesn't seem to be a widely available size.

I've got a couple of ideas for printing projects with squared paper that I might try on Kickstarter when my current project (character sheets) is completed.  In the meantime, my favourite site for generating custom squared paper to print at home is: http://incompetech.com/graphpaper/plain/ 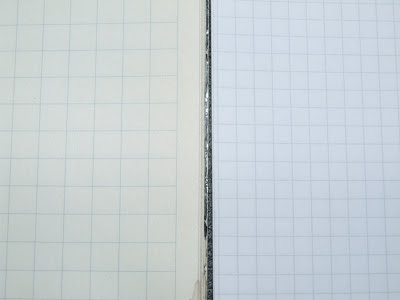 And here's some words of wisdom about maps from Tubbs:  Edward and Tubbs - Lines

I was tidying up our Lego Heroica sets last night when it crossed my mind that in a slightly different layout format the pieces could be used to create dungeons with a more traditional D&D look.

Using a base board, the Heroica parts, and a pile of dark grey bricks from another Lego set, I set about making a small dungeon section.  The scale is 1 stud to 5 feet so the section pictured represents 120'x120'.

This is a great way to create map ideas as the design is far easier to adjust than a paper version.  You can also add extra details (note the fireplace, table, chair, secret door, and the mean looking trap in the Goblin Chief's room). The photo taken directly over the model gives the appearance of a 2D geomorph.  With several different sections designed and photographed they could easily be slotted together in Photoshop.  Of course, an even better option would be to have lots of them made up at the same time, but that would take quite a lot of Lego. 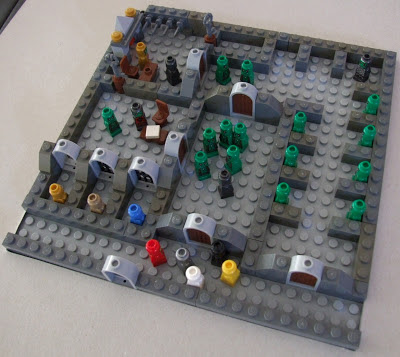 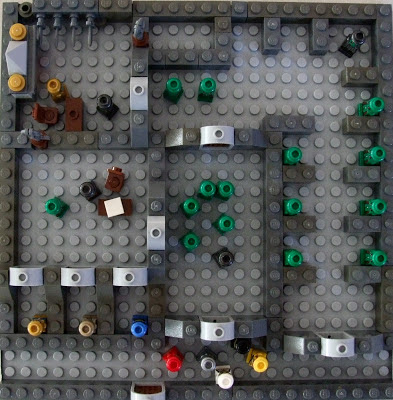 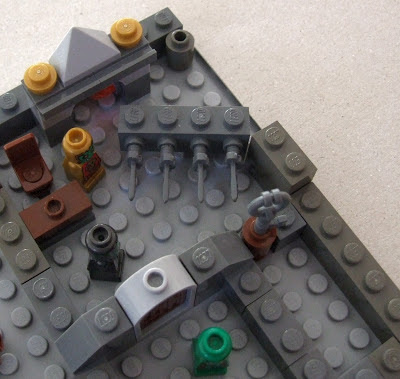 Our Character Sheet Pad is entering the final stretch on Kickstarter.  With just 72 hours left to go it is at 90% of the goal.  We only need 3 more backers and we'll be there.

Since I made the PDF of the Character Sheet free to download, over 350 copies have been downloaded.  Hopefully, many of those downloaders have visited the Kickstarter page and asked for a reminder email (Kickstarter normally sends these at the 48 hours to go point). 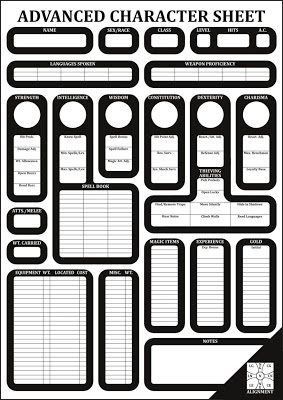 There's just 7 days left to to become a backer of our Character Sheet Pad Kickstarter.  We're currently at 80% of the goal, and I can almost smell the black ink as it's being stirred.  All we need are another half a dozen backers, and this classic design will be back in print.

Here's the version of our fight with added dice rolls.  See the previous post for the a mathematically averaged version of the fight.

Summary of the combatants:


Round 1 Fighters win initiative
End of round 1 PW has 61HP, Hedun has 36HP and Taylor has 46HP

Round 5 Fighters win initiative
End of round 5 PW has 38HP, Hedun has 5HP and Taylor has 35HP

Round 6 PW wins initiative
End of round 6 PW has 31HP, Hedun is DEAD, Taylor has 31HP

Round 7 PW wins initiative
End of round 7 PW has 26HP, Taylor has 31HP

Round 8 PW wins initiative
End of round 8 PW has 18HP, Taylor has 31HP

Round 9 Taylor wins initiative
End of round 9 PW has 15HP, Taylor has 24HP

Round 11 PW wins initiative
End of round 11 PW has 9HP, Taylor has 3HP

Round 12 Taylor wins initiative
Victory for the PW then as it still has 6HP.  The great worm munches down its armour plated lunch and then curls up at the back of its cave to recover its strength.

I did two more fast battles and the worm was the winner of both ot those too.  In one it was a similar outcome to this one but it was a couple of rounds shorter.  In the other the worm poisoned poor Taylor in round 2 and by round 5 Hedun was also slain.  The moral of the story is that whatever level you are a purple worm is very bad news. 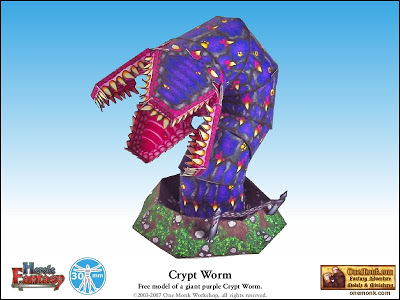 This Crypt Worm is from One Monk Miniatures and is available as a free download.
Posted by Peter Regan at 23:49 2 comments:

Following on from yesterday's post, here's a recap of the fight:

Basic stats are as follows:

There's no surprise rolls required as all combatants are  there's enough distance between the fighters and the worm for them not to change anything in the fight.

Ok so here we go:

Round 10
At the end of the round remaining HPs are Purple Worm 7.25, Hedun DEAD

Victory for the Purple Worm then, but only just.  I reckon the fighters would have probably beaten the worm with some basic tactical moves.  I'll be back after a drink and some supper for a couple of tries at this using dice. 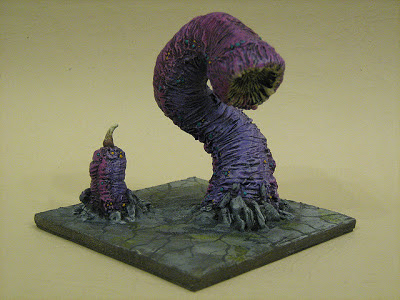 This Purple Worm by Reaper Miniatures 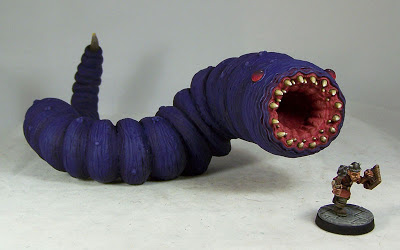 Photo by Otherworld Miniatures
Posted by Peter Regan at 16:55 4 comments: 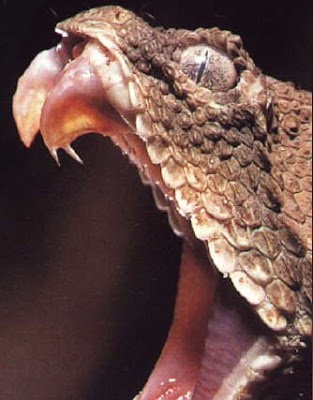 I Parked the Car on Richard III

I've got a special interest in the Battle of Bosworth field, as I live just a few miles down the road.  I like the idea that over 500 years ago, troops were possibly tramping through our garden on the eve of the battle.  Based on today's discovery I think there's also a chance that I've parked my car just a few feet above the remains of Richard III.

The University of Leicester have this morning confirmed that the remains found buried in Leicester carpark do indeed belong to Richard III.  Here's a link to the University's page with details of this extraordinary discovery. 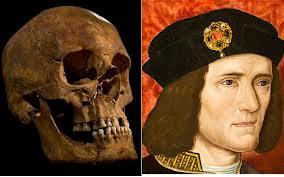 Our Advanced Character Sheet Pad campiagn on Kickstarter is just past the halfway point of its 30 day run.  It's currently at 74% with just an additional £78 required to reach the goal.  I think we can manage this in the two weeks remaining.  If we can get £100 extra, then the stretch goal unlocks a free pad of B/X Character Sheets for every backer that signs up for two or more of the primary design.

If you haven't already done so, please take a minute to visit the project page here: