We've had a terrific response to the first full day of the Oubliette Issue 6 giveaway.  By the time I've finished this post, there's a good chance the total will be just over the 400 mark.  I'll run another report towards the end of the giveaway but, given this flying start I'm sure that the latest issue will beat the 800+ chalked up by Issue 5.  Thank you to everyone who has posted details of the giveaway on their blogs, as it really helps to spread the word. 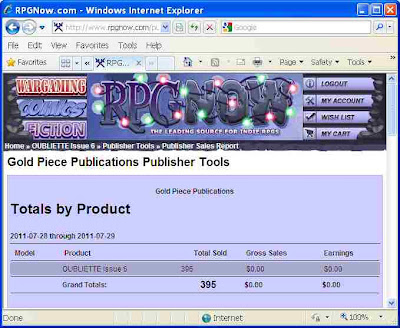 Issue 6 of Oubliette is now available for FREE download from RPGNOW.com Here's a link straight to the page for it:
Oubliette Issue 6

As a thank-you to everyone who has supported the magazine by buying it, reviewing it, and generally offering encouragement, Issue 6 will be available for free download from rpgnow.com until the end of August.  If you like Oubliette please support its future development by buying a back issue in print or PDF form. 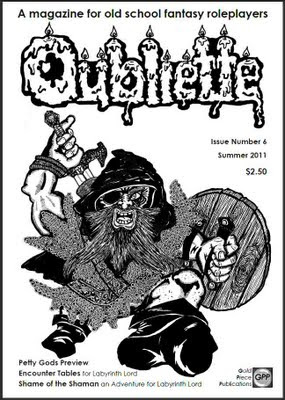 Here's the Full Contents:
Posted by Peter Regan at 12:43 2 comments:

Just finished the last of the artwork for this issue, and Pete has dropped it into place.

Proof-reading began last week. But the grind continues as we have a horror of leapers. Leapers are the pictures, headings, and spelling errors that leap out at you screaming, "NOOOOO!" once you've published the magazine. We try and minimize the existence of the leaper in Oubliette, but inevitably, as the proof-reading continues, unbidden, even months after, someone will say, "Dammit! Missed a capital here!" or "That should have been in italics!" resulting in much wailing and gnashing of teeth.

Here below is the team, as we strive to filter out human error. 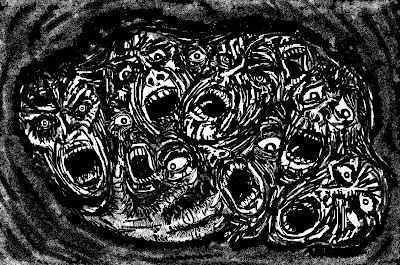 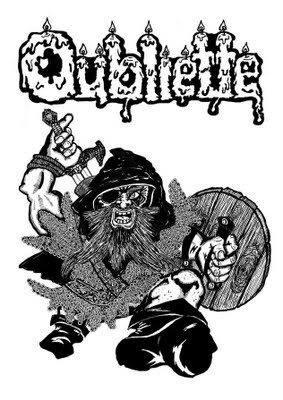 Issue 6 of Oubliette is due for release next week.

Following the terrific response we had to the Issue 5 giveaway, Issue 6 will also be available for a limited period as a free download from rpgnow.com.

Here's an advance look at the contents:
Posted by Peter Regan at 14:34 1 comment: 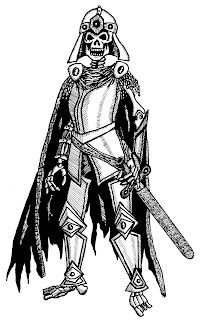 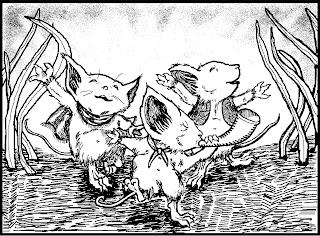 (Previewed here The Skeleton Lord from Monster Club and a single frame from Mouse Watch both to be found in Oubliette Issue 6-out soon).

Infected with plague, and bellowing "unclean" periodically, I've had my head down getting the art together for our next issue.

With each magazine, I have attempted something a little different. I've mucked around with greyscale, attempted a higher degree of realism, experimented with block colouring, looked at all your blogs and the sorts of pictures you admire and attempted to incorporate elements of modelling and shading as used by the artists show-cased.

My style has been to reel off whatever is my head without too much forethought. Images appear suddenly and very vividly, and I get them on to paper as quickly as I can, and clean them up in photoshop. This sort of technique, produces pictures with immediacy and drive, but they don't necessarily tickle the connoisseur palette. But does a magazine require masterpieces on every page (my head is shouting, "Yes Marg-sort yourself out"). I recall a critic talking about Orson Welles in a stage production of Moby Dick saying for the first ten minutes he was the most magnificent thing he'd ever seen in terms of voice and presence, but after that, even that magnificence managed to be come mundane, because it was all the same-there was nothing which surprised, because it was all masterly.

Now such a comment is not meant to inspire people to be mediocre with occasional flashes of brilliance. Laurence Olivier struggled with recreating masterpieces: he exited the stage after an electrifying performance, to be greeted with "You were brilliant!", to which he replied "Yes! But I don't know why!"

These anecdotes and many others chase each other around my head whenever I draw or write, and whilst I'm not into suffering, pain and angst(okay, I occasionally indulge but I do know it's a complete waste of time), I do believe that life can be directed towards a process of continual self-improvement. I'd like to improve my drawing, and whilst I fight the good fight, I can enjoy spectacular failures and be modestly and most Britishly pleased by any accomplishments. If what I do is interesting and varied that's a bonus. Chief in my head is blanket accessibility. I'm into being inclusive-anyone should be able to enjoy this stuff-ah which leads to some of my naughty stuff. Yes, I did draw pole-dancing mice, and implied various unsavory happenings, but when I do things like that, I try and keep it all in the grand tradition of British Panto. Hopefully it's multi-layered enough that it can mean separate things to different ages and levels of experience. Maybe I won't be showing the raven eating the eyeball of the decomposing head on a spike to my five year old, but there's always next year?
Posted by The Marg at 12:27 7 comments: