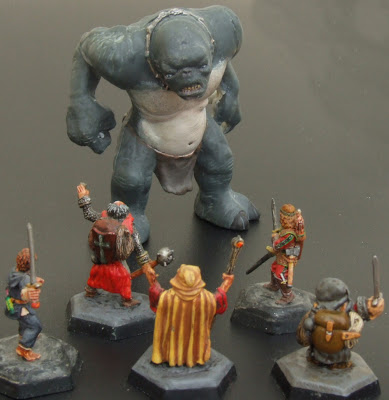 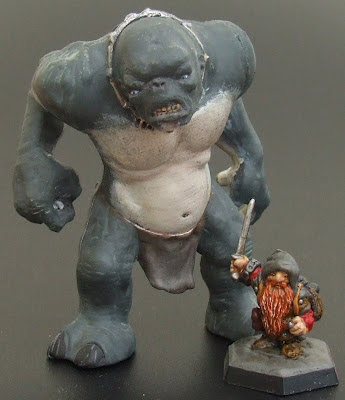 Really looking forward to season two of Game of Thrones. Here's a quick recap of the important bits of season one (originally published in Oubliette Issue 6):

King Robert Baratheon: I’m King of the Seven Kingdoms. I’m a fat bugger. I like to drink wine and f+&k girls (I tell the viewers that every episode I’m in an’ all). I used to be fit and gorgeous, but after I usurped the Iron Throne with the help of Ned Stark, I married the richest blonde bint in the kingdom, and being all salt o’t’earth and northern, frittered my youth away on alcohol, feasting and trying to get as many STDs as possible.

King Robert Baratheon: No yer not. Yer Lord Eddard Stark, Lord of Winterfell, Lord Paramount of the North, and Warden of the North. But as yer me best mate, ah calls you Ned.

King Robert Baratheon: Shurrup, I’ve made a mess of running my kingdoms and I need you to be the King’s Hand and rule in my stead so I can drink wine and f*&k girls.

King Robert Baratheon: Nononononono. It were totally unsuspicious. There’s no way my wife could be having an incestuous relationship with her brother and producing progeny that has nothing to do with my loins, despite the fact that they’re all blond and I only produce dark, swarthy kids because I have a dominant dark, swarthy gene. There’s no way she could have killed the last Hand – have you got some wine and some buxom girls for me?

Lord Eddard Stark: My wife’s not going to like me running off. Last time I did that I returned with a baby saying that it was mine – I suppose this’ll give me a chance to get rid of my bastard son John Snow on the wall that guards us all against the Scots.

Queen Cersei Lannister: Robert, I’m just off up that tower over there where Ned’s son, Bran, goes climbing, to … um … do some … quilting.

King Robert Baratheon: Whatever, wife. Ned I wish I’d married your sister, whom I revere above all other women, but who died before I became King – where’s the wine and girls, man?

Jamie Lannister (Inflagrante with his sister Cersei, wife of King Robert): I killed the last King, and now I’m into killing kids to protect my incestuous secret. I use Timotei shampoo and conditioner to keep my hair this good.

Bran Stark (surprising Cersei and Jamie inflagrante): What are you and your sister doing?

Jamie Lannister: Ah – the things I do for love (tosses his golden hair and pushes Bran out of the tower window).

Tyrion Lannister: I may be a dwarf, but I’m going to act everyone off the screen every scene I’m in.

Jon Snow: I have a grudging respect for Tyrion – he may be short, but what a fine actor. Oh look, The Wall! I get to kill the Scots.

Daenerys Targaryen: My dad was the mentally-ill King who went all Nero on the Kingdoms. I’m a pawn of my vicious and depraved brother Viserys who’s married me to a big horse-riding savage lord called Khal Drogo who only has one sexual position.

Daenerys Targaryen: Dammit. I’ve just fallen in love with Drogo and some witch has turned him into a vegetable. I’ll have to pillow him and burn myself with him. Day-um, I don’t burn! And look – the dragons' eggs which we all thought were fossilised have hatched, and the dragons are now my babies. Right, now I have to get back the Iron Throne which is my birthright. Might take me a few seasons though.

Cersei Lannister: Right Ned, you’ve given me a chance to escape with my kids but I’m going to imprison you so you have to accept my cruel, mentally-ill son Joffery’s reign.

The Stark Kids: They've killed Dad! Let's declare war. I'm taking my dire wolf with me. It's been woefully under-used – if they've got a budget for CGI dragons, then surely they can afford a big dog in a bearskin rug.

George R. R. Martin: Bugger ... I’ll need to pull my finger out and finish those last two books, but all I want to do is drink wine and f**k girls.