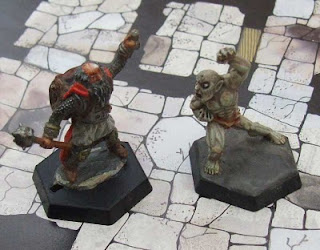 We set out to the dungeon and upon arrival, quickly head down the stairs to the first level. We follow a tried and tested 'safe' route which so far has got us in with no problems. Once inside again, we make our way back the section of the first level where we've previously encountered loads of undead. We stick to main passageways, but we're unable to avoid bumping into three giant toads. The party are fresh and ready for action though, and we make light work of them.


Once we reach the edge of our map, we begin exploring the rest of the area. We have half a dozen or so encounters with undead, and our two clerics are able to turn enough of them to make the combat manageable. Our treasure haul swells: 6,000sp from one room, nearly 3,000gp in jewelery from another. Then we disturb a solitary ghoul and fail in turning it. The fighters get stuck in but by the time we've downed him, three of us are paralyzed and everyone except the Magic-user has taken hits. We lick our wounds and make for one of the rooms we've previously rested in. There is some disturbance outside the room while the wounded sleep, but we've spiked and braced the door, and whatever is on the other side eventually moves on.


Once rested and restored, we continue our explorations and run into a crab spider. Poisonous creatures terrify our party. Thankfully the beastie fails in his attempt to bite the Dwarf and is promptly slept by the Magic-user. We then proceed to turn some zombies and open a door to find at least half a dozen stirges flapping about. We close the door on that one, not wanting to risk it without a sleep spell to fall back on. We back-track taking a small detour around the area and find a chamber with a stone bridge which spans a 10' wide chasm. We don't trust it, but after some discussion, we lose patience and start to cross it one at a time. Once the first of us is across, he throws a rope for the rest to hold as they cross. The bridge collapses as the Magic-user is making his way over, but luckily he manages to scramble to the safety with the rope. Tough luck Mr. Curtis, you're not getting us this time!


Next, we have our first encounter with other humans in Stonehell. We open a door and surprise an Evil-looking Cleric of Thusar Gillscar accompanied by seven Acolytes. The Dwarf and one of the Fighters cut down an Acolyte, and stand ready to take the rest of them. Our third level Cleric casts hold person on the Evil Cleric, who makes his saving throw and retaliates with a cause light wounds, but fails to touch the Fighter. The remaining seven opponents are downed in as many rounds by the Dwarf and Fighter, along with a few crossbow shots over the Dwarf's head.


Throughout this part of the dungeon, we've come across stone slabs that cover small rooms, many home to undead, and some containing loot. We now come to what seems to be the last of them, but it is a little different from the rest. The edges appear to be stuffed with rags, dirt and other debris, perhaps in attempt to make it air-tight. There follows a lengthy discussion about whether to open it. We're pretty sure there's something nasty inside but we also think there'll be treasure. Eventually, we cover the rags in oil and, from a distance, light them up. They burn for a while but the seal holds . There's no way the slab's coming off with some force, and that means one of us would end up standing face-to-face with whatever's in there. Reluctantly, we decide to leave it and head for home.


We make it home with over 4,000gp in treasure and a couple of healing potions. As part of our campaign setting, we use a mechanism where we only get XP for treasure that we donate to the community we live in. We hand in most of the gold, and along with all the kills/turns, get enough XP for three of the party to level up. A really rewarding session. Realizing that we've only been playing for about three hours we decide to have another session after a short break. I'll write that one up in a few days.
Posted by Peter Regan at 15:15