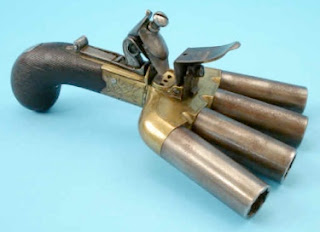 Not content with giving me a migraine over his first Present Arms! article, where I had to look up so many guns, I took to eating the discarded, screwed-up balls of paper containing my first efforts. This time it's Monster Arms. Monster @#£$ing Arms. 'What?' you may all cry in unison,'Great fun! Flights of fantasy-right up your street!'. No. No. No. You don't understand. Depper describes these arms most eloquently. These are guns that actually should work, misfire, blow up. This means understanding how they work.

Now look here. I like kittens, puppies and pretty dresses (albeit the former two worn on Steve Buscemi's head as a hat, a la Con Air, and the latter on High Court Judges). Flintlocks, revolving barrels, pistons, air undergoing adiabatic heating to several hundred degrees-this is just out and out gender-biased cruelty.

Suffice to say: Any more extra-ordinary ventures of this sort from Mister Depper and I shall introduce him to the joys of my calligraphy pen in a most rude and unhealthy manner.

Or maybe, and actually, much more likely, I'll just occasionally rant and knuckle down to the joys of concentrated prep and creation.

Here's the line drawing of the Orc Pistol. The finished version is nestled safely in the layout of Issue 4 with it its brothers.