I've been a bit quiet for the last couple of months as I decided to take the summer off. However, now we're in September, I'm really looking forward to getting back to some gaming projects.

Tomorrow (Saturday 12th September), I'll be at Concrete Cow in Milton Keynes with a small stand.

Next Saturday (19th September), I'll be at Dragondaze in Newport with a slightly bigger stand.

Then the first weekend in October, I'll be at the Derby World Wargames show in Castle Donington with a even bigger stand.

I'll also have a stand at Dragonmeet in December.

I've started work on a new Kickstarter campaign and I hope to launch it later this month. It will be an A5-sized, spiral bound B/X Monster Reference Index. It's influenced by the monster index in the back of the 1st ed AD&D DM's Guide. Should have 400, possibly 500 monsters and a selection of handy reference tables. 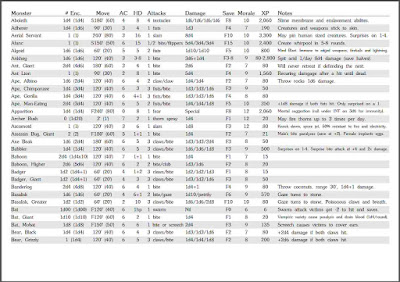