2019 was a good year for the business. The two highlights for me were getting The Black Hack Second Edition rewards sent out to our Kickstarter backers and The Black Hack picking up a Silver Ennie award at GenCon. Ongoing sales of The Black Hack have been strong and we now have 2 distributors in the US (Exalted Funeral and Noble Knight) and in the UK Leisure Games are carrying stock. We should also soon have copies of The Black Hack in general UK distribution via Asmodee.

Once the main work associated with The Black Hack was over it was nice to get back to a few smaller Kickstarter projects to fund print runs of several notebooks and booklets. In addition to the Kickstarters I'm always on the lookout for small niche publishing projects. In the last few years I've had the pleasure of printing material featuring the creative talents of Kristian Richards, James West, David Black, Dyson Logos, Charley Phipps and Karl Stjernberg. In 2020 I'll be helping Fish in the Pot with the UK/EU distribution of their one page dungeon zine.

During the year we managed to attend 5 conventions (Hammerhead, UK Games Expo, Barrage, Chillcon and Dragonmeet). I hope to do a few more shows than that in 2020, but they are very time consuming and apart from the Expo and Dragonmeet the financial rewards are fairly small.

I start 2020 with a Kickstarter project (Combat Counters) to complete which should be finished by the end of February. Then I want to run a follow-up project for The Black Hack to fund a booklet of classic monsters which will be a useful supplement for GMs running modules from other OSR/original games. After that I would really like to tackle a reprint of The Lichway. I first talked about my plans for that project in 2015. Although that was a long time ago, when you consider the adventure was first published in 1978, it's still the recent past really. I have done more groundwork on the project over the last 4 years, but more importantly, my ideas on how to best present the adventure have evolved considerably. In between these major projects I should still have time for a few small projects to produce paper pads, booklets and more 2.5D dungeon expansions.

When I started Squarehex I set a very low financial bar for the business. Essentially, I wanted a hobby business that would allow me to print niche items with little regard for how commercially viable they were. That sounds more reckless than it is in reality as I've never lost money on a project. Indeed all my Kickstarters are planned so I know the exact weight, cost and postage for every item before I start. The business has now almost reached the point where it could be a full-time job. If you'd told me at age 20, 30, or even 40 that I could be doing this for a living at the age of 50 I don't think I would have believed it. Even though the pay is a fraction of what I used to earn in the corporate world, I think I'm now in that small group of people who get to do a job that doesn't really feel like work. Thank you to everyone that has supported our projects or bought things from us via the webstore or at a convention in 2019. I hope we can tempt you back for more in 2020. 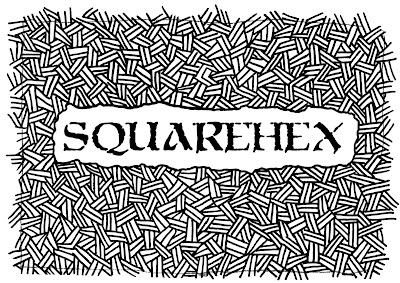